Maztech Puts its Confidence in Tooling from ITC 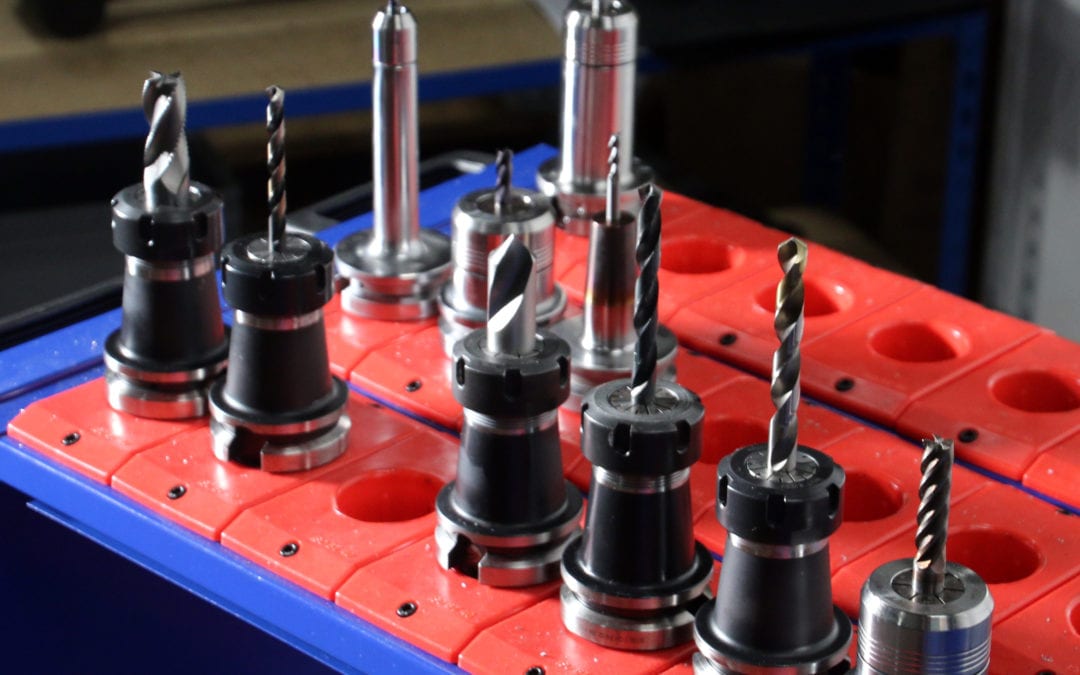 As far as subcontract machine shops are concerned, Maztech Precision Engineering (MPE), genuinely is a trailblazer. Founded by Managing Director Wayne Bouchier at the youthful age of 25, the Letchworth Company has purchased four Mazak machining centres that includes a VTC-530C, an i-500 and the jewel in the crown, an i-300 AWC 5-axis 32 pallet machine that runs unmanned around the clock.

However, the journey to acquiring high-end machine tools was certainly an uphill struggle; as the entrepreneur started the business with little more than loans, family support, some good faith from Mazak, a sprinkle of luck and truck loads of hard work and determination. Six years later, the combination of hard work, research and experience has been combined with some innovative business nous that has seen Maztech invest in the right choice of machine tools from Mazak, high-end CAM software from OPEN MIND and of critical importance – reliable, consistent high-quality cutting tools from Industrial Tooling Corporation (ITC).

Recalling the early days of the business and how the relationship with the Tamworth cutting tool experts transpired, Wayne said: “During the first 3 to 4 years of business, we relied largely upon one prominent tooling vendor as well as a few smaller vendors, the combination gave us access to a wide range of products that would suit our initial needs as a small 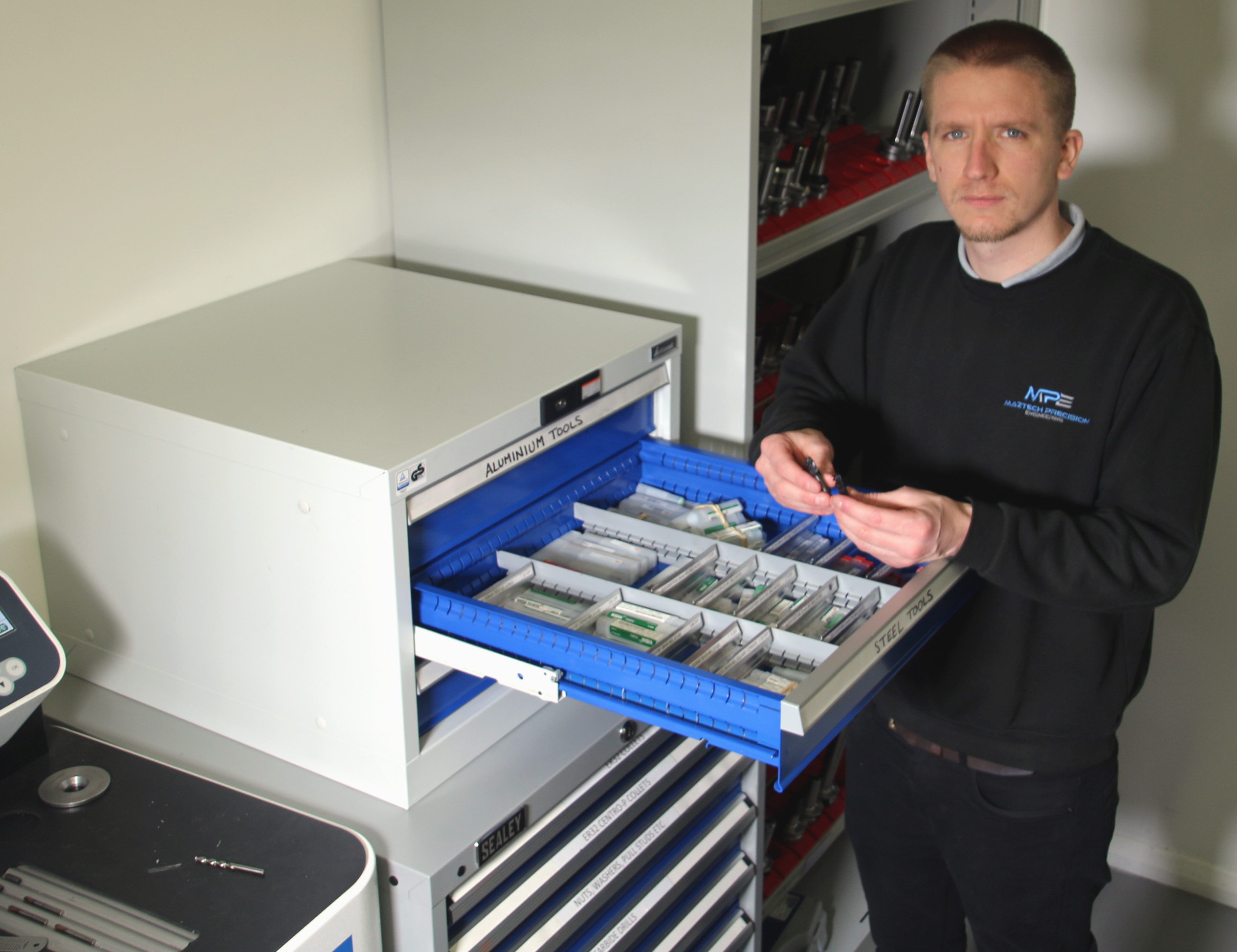 business. The primary supplier continually promised us a vending machine, which never materialised. Simultaneously, the price of tooling kept fluctuating. As a small subcontract manufacturer, we sometimes factor the cost of tooling into our work, so ever-changing prices were unacceptable. Instead of inviting every cutting tool sales rep to our site to conduct countless time-consuming trials, we asked 10 vendors to work with us on one single job.”

Applying this novel and efficient route to selecting the most appropriate tooling vendor, Maztech had an EN24 component for the MoD that was required in a volume of 300-off. Utilising one of its 5-axis Mazak machining centres and high-performance CAM software from OPEN MIND, each steel cover component required over 10 minutes of continuous trochoidal roughing. So, Maztech asked the 10 leading vendors to supply a couple of their leading 5-flute solid carbide end mills to test. Each tool from each vendor was run at identical high-speed and feed parameters that had been agreed with each of the 10 cutting tool engineers from the various suppliers. 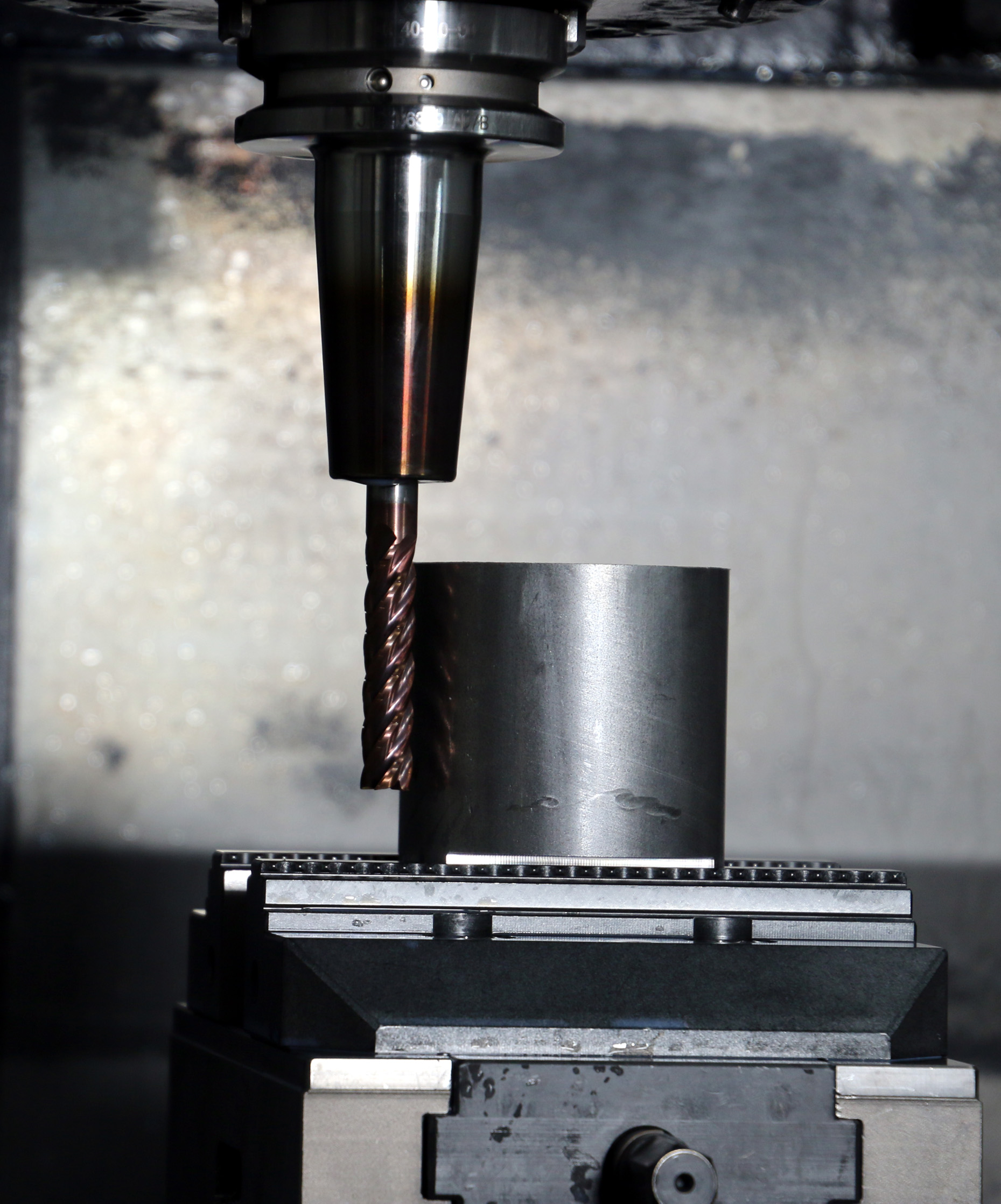 As Mr Bouchier continues: “Every company claims to have the best cutting tools, so we really put that theory, and the confidence of the reps to the test. This was a genuine test of carbide quality and the performance of the tool geometries. I ran every single tool until it broke, I then recorded the data and tried the next tool – that was the fairest way of conducting the trials.  The contrast in performance was staggering. We had one end mill that lasted just 30 seconds. However, most of the leading names in the industry

machined 5, 6 or 7 parts, with some of the best performers reaching 10 finished parts before failure. The second-best tool managed to cut its way through 14 parts before failure, which we considered very good performance when measured against all the previously tried brands. However, the ITC tool was in a completely different league!! ITC’s Gary Bambrick supplied the ITC Widia 577C 5-flute solid carbide end mill and it blew everything else out of the water!”

“The ITC Widia 577C completed 25 parts before performance started to diminish. Despite the deteriorating performance, the end mill just would not break. It was genuinely unbelievable. Basically, with the Widia tools, the carbide is so good that they hang on for dear life, they just do not break. When you have absolutely ‘thrashed the arse out of it,’ all the flutes might fall off and the remaining rod may weld itself to the part, but they will not break. They are unbelievable. This was a definitive measure of just how good the quality of the carbide is, and it put an end to countless reps calling upon us,” Mr Bouchier pronounces.

Following this testing process, Maztech introduced ITC Widia solid carbide end mills to other components at its facility. “Over 20% of our work is EN24 and another 20 to 30% is stainless steel, so we rapidly introduced ITC’s solid carbide tools to all our steel parts. Based on the performance of the ITC Widia 577C, we felt confident that we could roll them out throughout our machine shop. I probably didn’t give ITC and Gary the ‘fairest of opportunities’ in the early days, but the 577C trial changed all that.”

“The next step was to try the aluminium cutters and it has just grown from there. In the last couple of years, we have implemented ITC’s deburring tools, thread rolling taps, ball nosed end mills, through coolant drills and much more. We only use solid carbide tooling – and ITC now supplies 99% of our cutting tools. The remaining one percent will be tools that ITC do not manufacture.”

“Our decision to work almost solely with ITC has been fully justified. We used to spend upward of £3000 per month on cutting tools, ITC has helped us to half this cost. Whilst a 50% cost reduction is impressive, what is more impressive is that we have doubled the size of our business, our productivity and our output in the last two years since introducing ITC. So, in real terms, without ITC, our tooling costs would be 4 to 5 times higher than what they actually are today,” says Wayne. 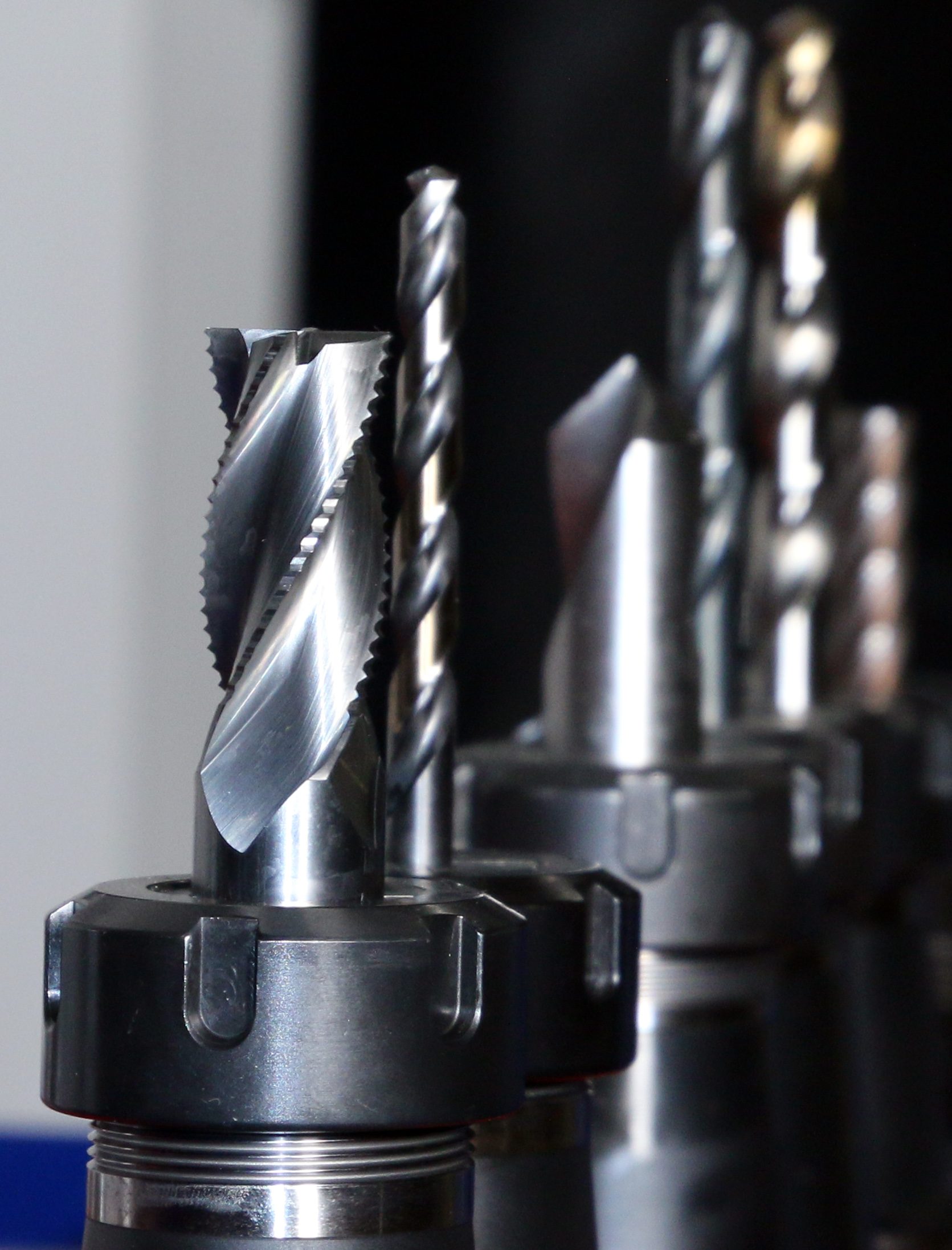 One reason behind ITC now claiming 99% of the tooling supply at Maztech is the service. As Wayne continues: “We machine 1000 steel blocks every 6-weeks for one aerospace customer and this job requires rough machining of 2-inch cube sections. We were using a long series 5-flute, 10mm diameter solid carbide end mill with a 42mm flute length and chipbreaker from our previous, and unreliable supplier. At that point, ITC didn’t have a 42mm flute tool with the dimensions we required, but they produced one for us. The performance of the ITC 5-flute 10mm diameter tool was comparable to that of the previous tool, so ITC revised the tool to extend tool life from 40 parts per tool to 50 parts per tool. This is a great testament to their service support.”

“As a company, we are running 7-days a week, so we have a consignment stock of ITC tools and we try to keep a minimum of ten of each type of tool in stock. Since, Gary and ITC have been involved in our cutting tool inventory, we initially slashed the number of different tools we used, by introducing more multi-application tools. As time has progressed, we have increased the diversity of the inventory levels to meet our ever-changing workload. To retain an element of standardisation, we try to keep a uniform tool library on all four machines. Each machine has the same 26 standard tools, which suits the 30 to 40 tool capacity of the machines. The only exception is the 32-pallet machine that has 145 tool stations.”

Looking to the future, Maztech is venturing into the realms of indexable cutting tools. Again, ITC has been on-hand to support the aerospace, automotive and motorsport subcontract manufacturer. As Wayne says: “We have tried a few of the ITC indexable tools and we’ve had some good results too, especially with the Widia VSM490. We’ve been cutting stainless steel dry with a 50mm diameter 5-insert VSM490 face mill and that has been very good.”

“We did a few trials from numerous suppliers and we found the Widia VSM490 face mill from ITC halved our tool spend on the inserts and it also made an improvement to tool life. Basically, we were taking a 5mm DoC in Stainless 304 and the ITC indexable reduced tooling costs by 15% and improved tool life by over 20%. This is a big saving on a job that is produced in batches of 150-off at least four times a year. The first-op machining time is 50 minutes per part with the VSM490 face mill with a second op that requires another 40 minutes of machining, so ITC is again delivering huge benefits,” concludes Wayne. 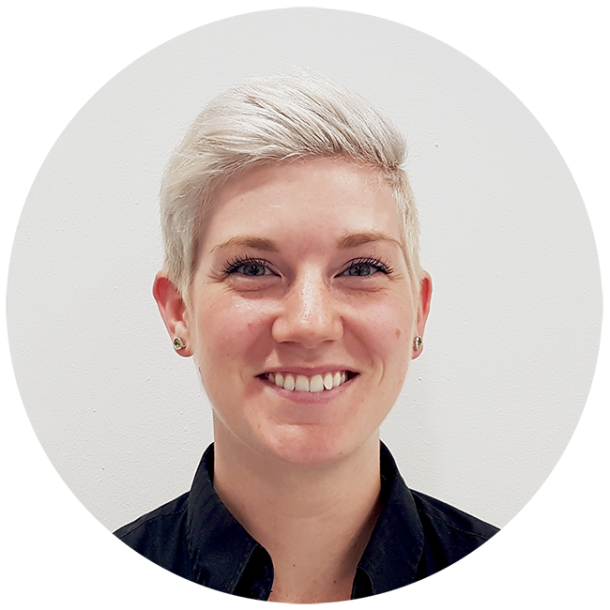